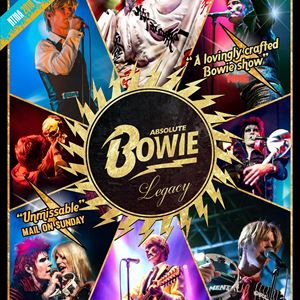 14+ only. 14s to 15s must be accompanied by an adult. No refunds will be given for incorrectly booked tickets.

There will only ever be one David Bowie, he was unique in every way and an inspiration to millions. Absolute Bowie continue to celebrate the life and music of the Starman with a spectacular show uniting Bowie fans across the UK. Absolute Bowie’s Legacy Tour is named after the Greatest Hits album released in 2016 and takes us on a musical journey of non-stop hits through the iconic singer's ever changing personas.

Absolute Bowie are proud winners of the ‘Best Bowie Tribute’ and ‘Best Tribute Band" at the UK Agents Association Awards in 2018. They are often credited with being the most accurate and exciting Bowie tribute with incredible attention to detail, costume changes galore, excellent musicianship and an electrifying front man.

Don't just take our word for it, the band provide a “Loving crafted Bowie show" (NME) that wows audiences across the UK. Check out their social media to see what people say about them - the band is, without doubt, the most popular David Bowie tribute in Europe and now in their 12th year.

Featuring the incredible vocals of John O’Neill as David Bowie, with our very own Ronno, Andy Marr on guitar, Fabio Cashio on bass, Ale Paolillo on keyboards and Alex Ricardi on drums.

Prepare to be taken from A to Z (Absolute Beginners to Ziggy!) with Stations to Station in between.